Museums, Historical Sites, and Points of Interest Visiting Us

Navigate thru all the sub categories of the website 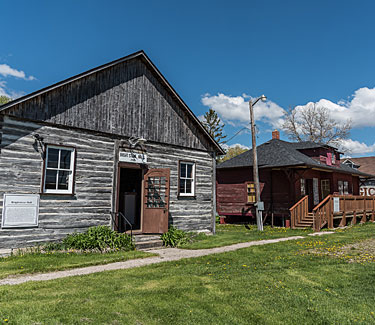 Established in 1967, the Pioneer Village Museum recreates a small pioneer village. It contains a log house, school, community hall, Canadian Pacific Railway Station, store, blacksmith shop and a Ukrainian Church with a bell tower. Most of the pioneers of this region were of Polish, Ukrainian, or German descent coming from the areas known as Galacia and Volhynia. These pioneers had to face many hardships in carving out the wilderness and learning to adapt to a new country and a new way of life. Many artifacts depicting the lifestyle of the early pioneers of the surrounding area are located in these buildings.

The Manitoba Glass Works was founded in Beausejour in 1906, by Joseph Keilback and his partners. The factory was sustained by a nearby deposit of high quality sand, and it was the first glass container factory in Western Canada. At its peak the Manitoba Glass Works employed approximately 350 workers, and eventually was purchased in 1913, and relocated to Redcliff, Alberta. The Factory Site remains, and was designated a Provincial Heritage Site #41, on September 27, 1989.

St.Mary’s Catholic Church in Beausejour, is home to the ceiling and wall paintings of the famous and now deceased internationally acclaimed Manitoba artist Leo Mol. They are truly a sight to behold.

Your Opinion Matters. Tell us what you think !

How would you like to receive information about the Town of Beausejour in relation to COVID-19?

Fires may start easily and spread quickly but there will be minimal involvement of deeper fuel layers or larger fuels.